Kahles is one of the, if not the, oldest rifle scope maker in continuous operation in the world.
With over 120 years of operations, and the traditional Teutonic love for records and writs, they have "learned" a lot of things.
One of them is that simplicity is good.
Another is that you should not fear innovation when it is grounded in solid science and technology.

Kahles was acquired by Swarovski not too many years ago, but it has been kept as an independent branch and it has been given the place it deserves as the line that handles the extremely technical and professional products.
As such, it doesn't handle the "luxury" line of products, that is reserved for the Swarovski lines themselves, but it definitely is the line for professionals and perfectionists.

Of course, that comes at a price. No one in their right mind would question that, but since shooting is 80% mental and 20% all the other factors, if you THINK you will do better with a quality piece of equipment, you surely will.

But some sort of commentary is always useful, so let's take a closer look at the scope and put it in perspective by comparing it to other fairly well known FT scopes: 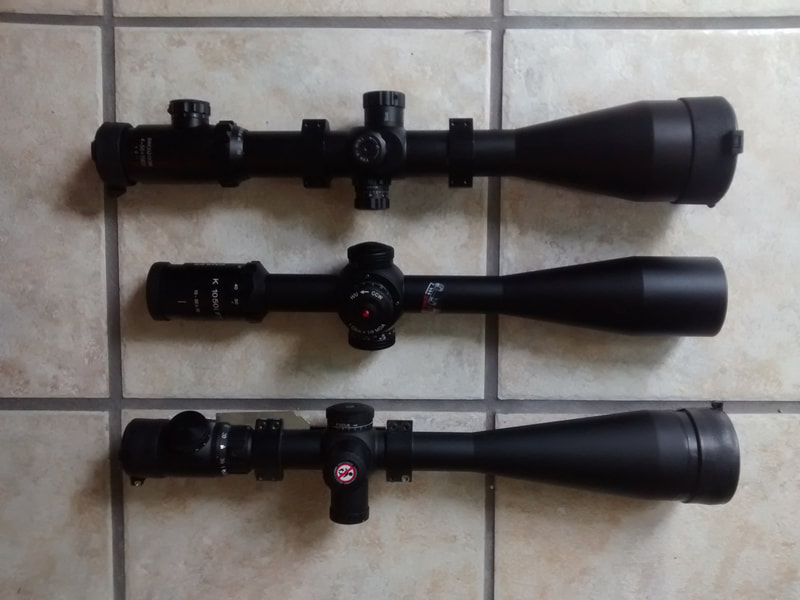 The K1050i FT is a relatively compact scope. On top is the giant SCO4-50x75 ED. On the bottom is the all too familiar SIGHTRON SIII 10-50x60
The "package" that CCA has defined as a useful starting package contains four pieces: 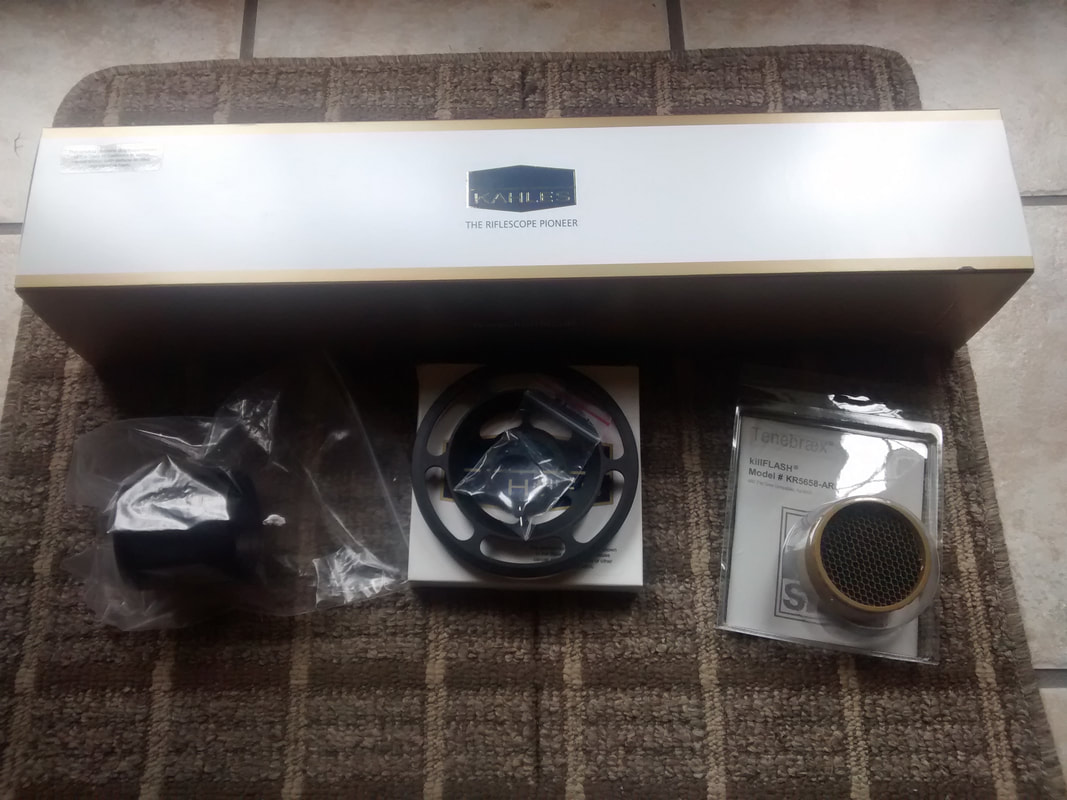 The scope on top, the 2½" sunshade, the large rangefinding wheel, and the Kill-Flash
In this arrangement, you can choose between rainy and dry conditions simply by unscrewing the KF and screwing the sunshade. Simple, versatile and light.

Of particular importance to airgunners is the way the erector tube attaches to the main body of the scope. While this is "old news" for all optics specialists and high end scope fans, it may not be common knowledge, so we'll look into it in some detail. But first, let's look into the scope itself: 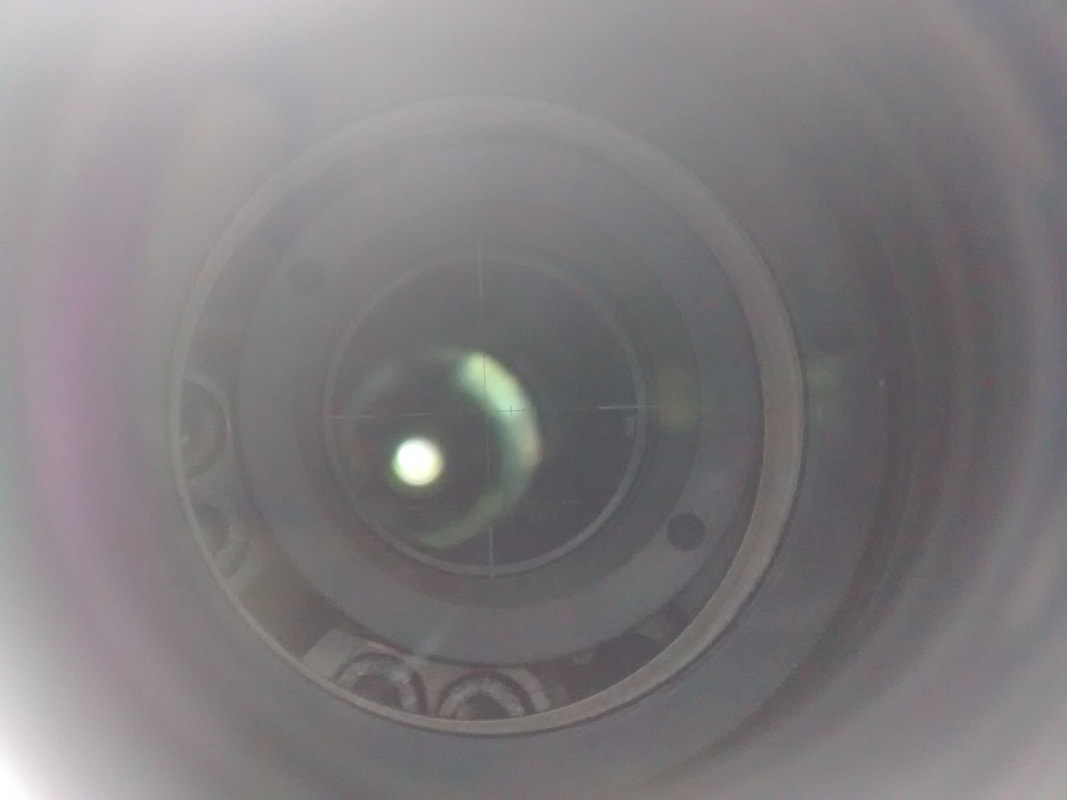 Here you can see the end of the erector tube, you can appreciate the reticle and the four allen screws. Keep this image in mind. 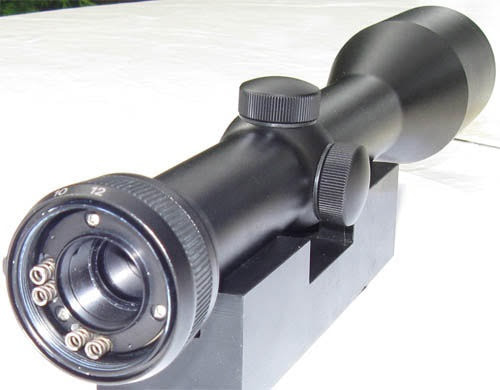 Though this image was published by Swarovski, it is clear that the purchase allowed the sharing of technology across companies.
Now, let's take a comparative look: 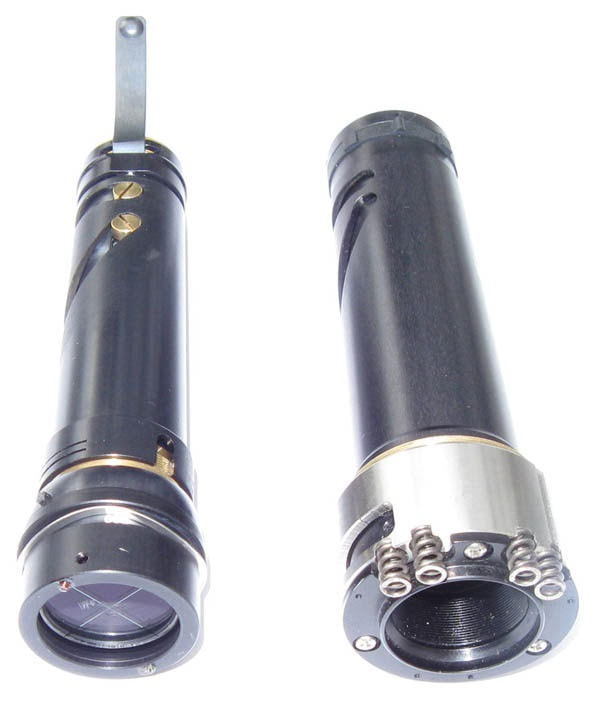 On the left is a traditional erector/zoom assembly, where ONE leaf spring is responsible for keeping zero, even in the face of fierce recoil forces and high frequency vibrations
On the right we see the Swarovski/Kahles technology, where the forces that keep the erector in place (and therefore the scope's zero) act IN LINE with the recoil forces with no friction.
Technically speaking, it is reasonable to think that the arrangement on the right hand will be much more robust. And it is. But it is also one reason why Kahles scopes of this line NEED a 30 mm's tube.
Now, how all this meshes into a finished scope is a little complicated, but fun to look at: 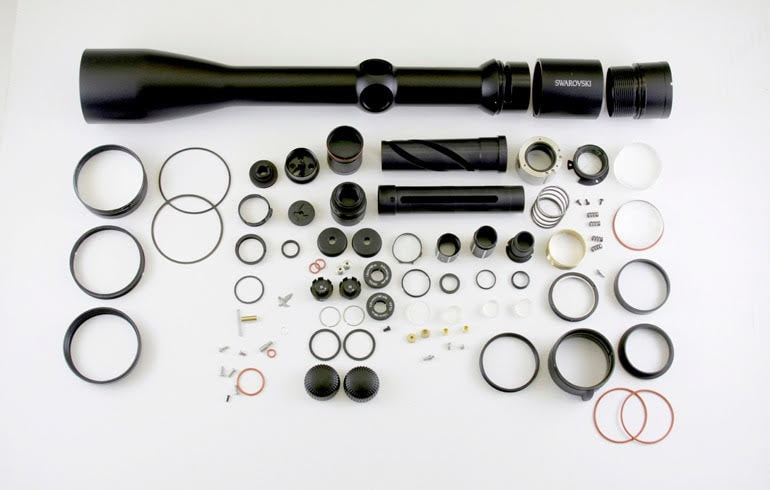 I hope that this view will convince almost everyone that it is not worth it getting into a good scope, LOL!
All this is fine and dandy, but most of you must be asking yourselves what it's like to look through a Kahles scope, well, here are some pictures and I need to apologize for the poor quality of the pictures, but my phone camera is the only thing I have on hand these days. 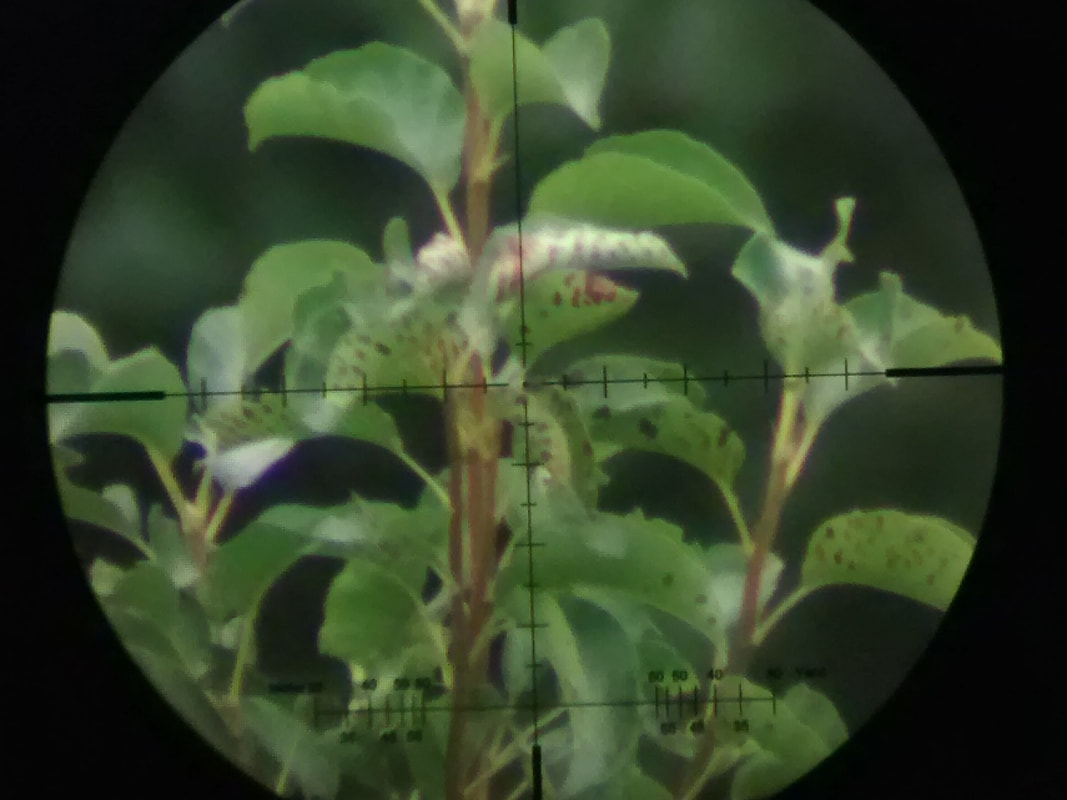 Picture of a 55 yards "target", on a heavily overcast day. With only 56 mm's of objective lens, it is remarkable to achieve such clarity at 50 X
By comparison, this is the same image using a 75 mm's objective in a 35 mm's tube, that is 20% longer and with almost twice the weight: 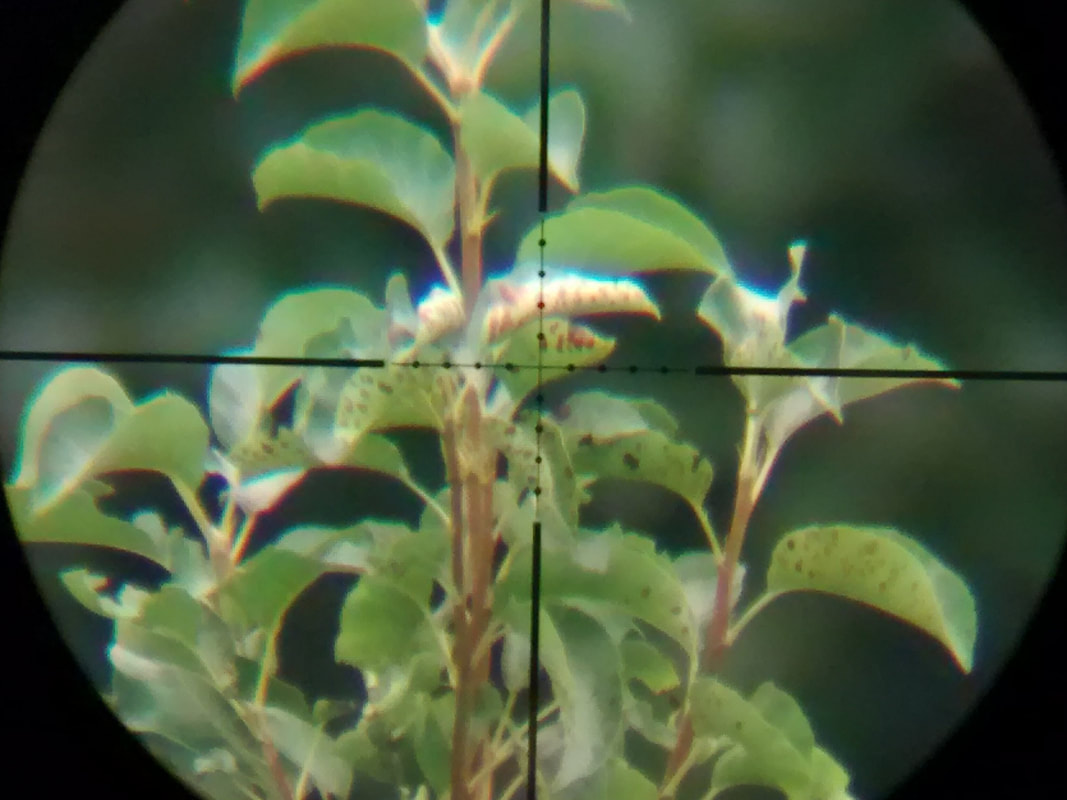 And if we look at the same image through a SIGHTRON SIII MOA-H: 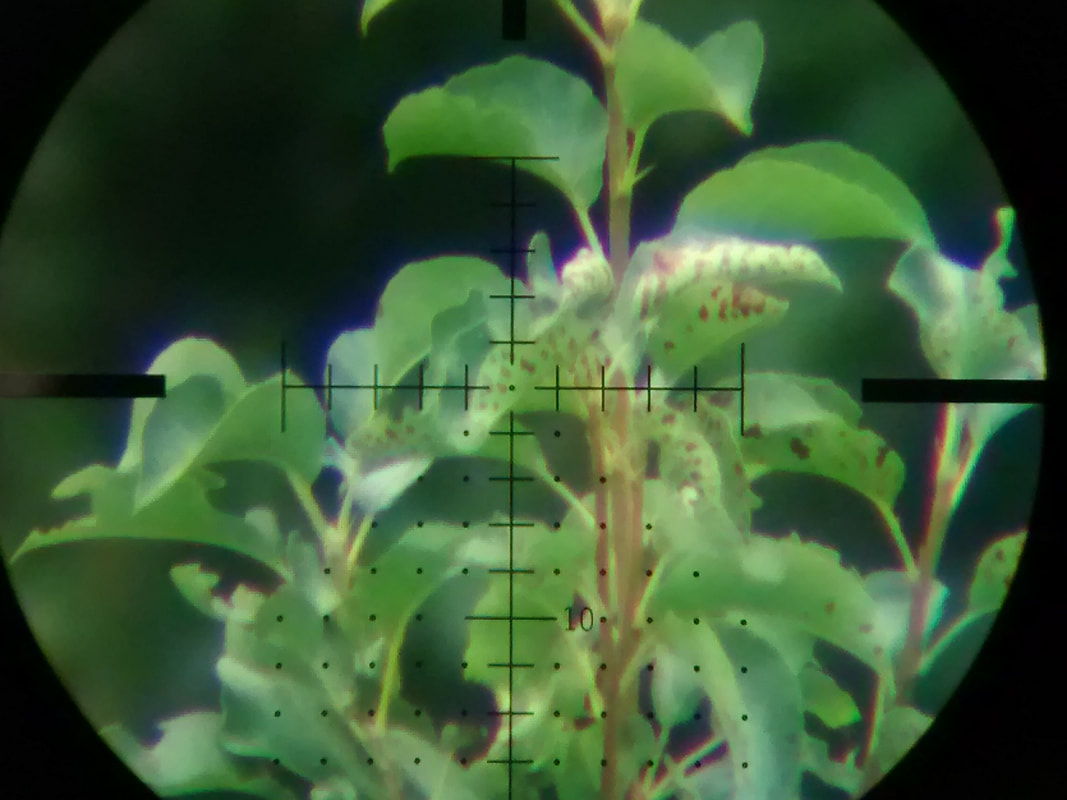 Good thing about extremely simple cameras is that you can actually see the difference between the lens coatings, as some are more skewed to the green, or to the yellow. I have to say that the truest-to-color image is the one produced by the Kahles.

If you want to see them all side by side, here they are:​

Now, the reticle of the Kahles is one that is specially designed for FT under WFTF rules.
While the subtensions in the reticle are advertised as being mrad based, the reality is that they are truly based on an 1 inch @ 55 yards dimensions.
Pretty close, but the difference is important when using ballistic software like PP Calc.
Here are the subtensions as they appear in the Users' Manual: 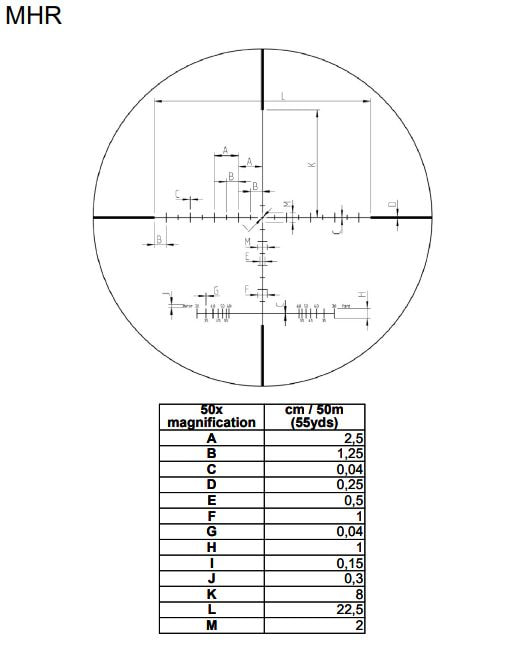 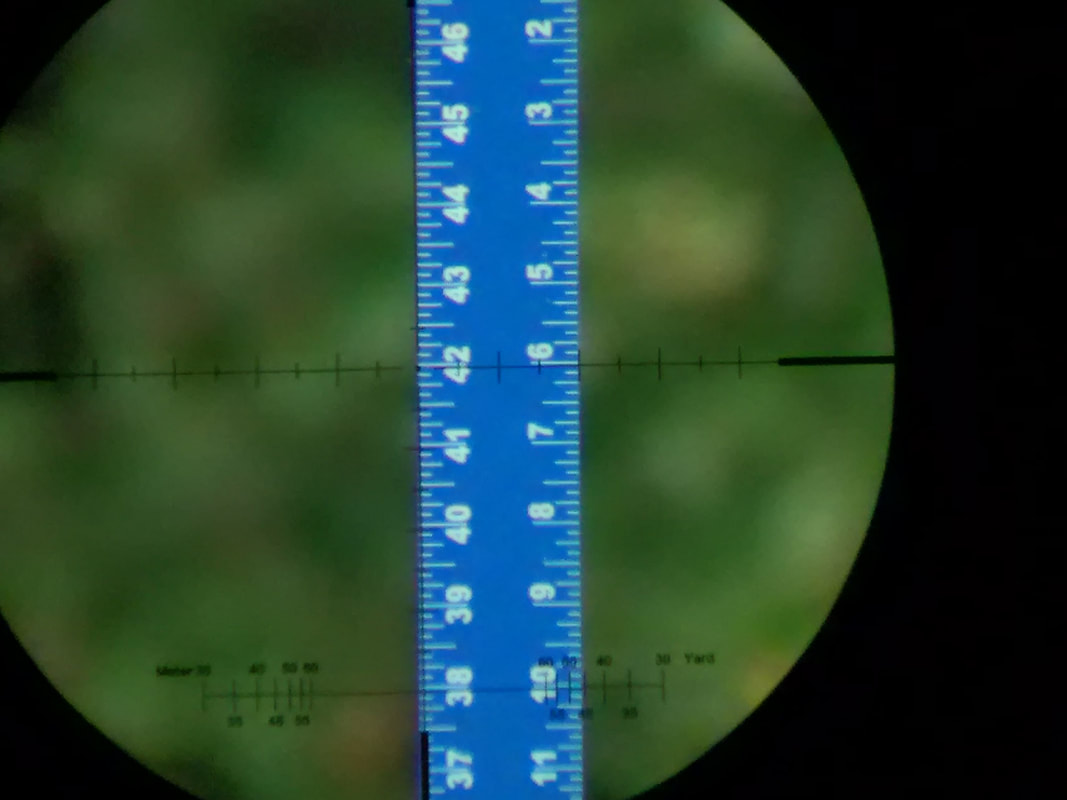 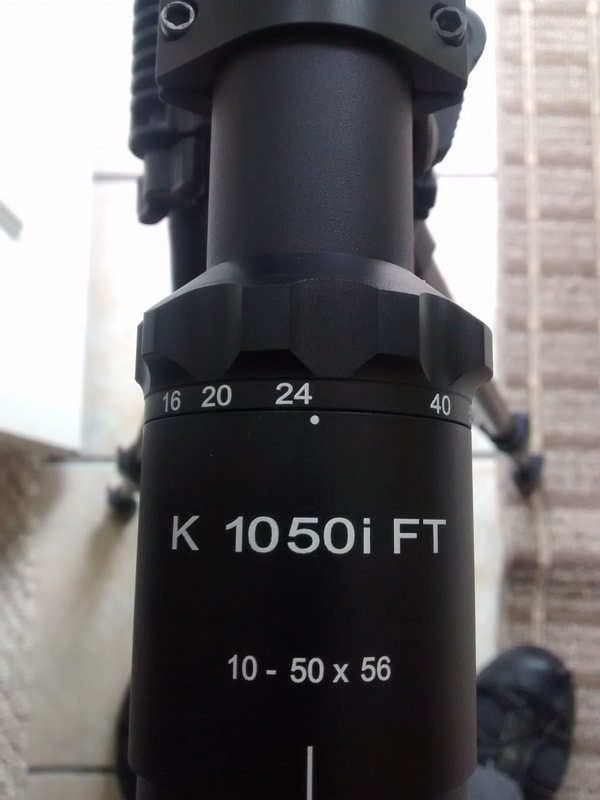 The same proportion holds true at slightly under 50X.

Now, let's be clear:
I am NOT saying that the specs are wrong, what I am saying is that THIS scope, set for MY eyes presents enough differences to warrant individual attention.

If you are thinking of using the Kahles, for ranging objects other than the full size killzones of WFTF rules (which have their own little scale at the bottom), then I would advise you to do the test and set the magnification to YOUR eyes' setting for the ocular.

The turrets have three full (and then some) turns for elevation and windage, so that the overall elevation excursion is 1.6 meters (over 5' 3") and the overall windage excursion is 1.20 m (a little under 4'). So there should be enough in one revolution to accommodate any reasonable trajectory with a FT rig shooting at least 10½ ft-lbs.

One thing that did call my attention is that the scope was shipped "bottomed out" meaning that the elevation turrets were dialed down all the way.
I would have expected a scope of this quality to be shipped optically centered and the turrets reset to zero, but when optically centering the reticle, I found that the zero was about 16 clicks off in elevation and about 8 clicks off in windage. Not a huge issue by any means, just information to keep in mind if you are absolutely zealous of setting the scope to its optical axis when mounting on your rifle. Or if you want us to optically center your scope, or not.

Lastly, it must be said that the cam that actuates the erector optics to define the parallax has been "corrected" to the characteristics of the lenses. This means that the linear distance in the focus wheel between 40 and 45, 45 and 50, 50 and 55, and, 55 and 60 are almost the same.
This should improve the capability of users to rangefind accurately and it also means that you do not need a logarithmic wheel to spread out the longer ranges.

Setting the rangefinding wheel at the top makes it easy to read the range without removing the rifle from the battery position, just a quick rise of the eyesight and you know where the target is at; and also allows left handed shooters to use the scope with equal ease.