November 28th, 2015
Update! The Nautilus wheel is in Production!

I guess you could say that I have come full circle.

When I started shooting FT I was using a Crosman 2200 pump rifle with a BSA 10-50X60 scope, arguably, the FIRST scope that any manufacturer made for the up and coming "Field Target" sport (year 2K).

I won several National Matches with that combination but, as is normal. I wanted more. So I went to a Steyr LG-100 (second hand) and improved it. During those long gone days, FT was still a 20 ft-lbs game every other year at the World's Matches and my 0.20" cal. Steyr gave me everything I wanted.

Life changed and I ended up living in the USA.

So, I started again. Living almost at sea level I saw no reason to stick with the PCP's and changed over to spring. Alas, that meant that the old workhorse of the BSA would be put out to pasture. I experimented a little with my HorusVision 4-16X50 (First Gen), but it would not hold zero in the Diana 54, so I started using a Vortex Diamondback 4-12X40 AO with some success.

Then rules changed for FT, the WFTF flexed its muscles and completely disallowed the 20 ft-lbs level. All World's Matches would be shot at 12 ft-lbs. Change again!

The more pronounced trajectory of the 8.44 grains JSB Exact at under 800 fps demanded somewhat more of my scope than the extremely flat shooting, wind resistant, 0.20" cal.
And I was somewhat idealistic in trying to find a "reasonably priced" scope. Not only for me, but for a lot of other shooters that wanted to use spring guns, but had had terrible experiences with scope / spring-piston gun combinations.

After almost 10 years of an ever broadening search, and after repeated insistence from my good friend George Harde, I was able to make a company hear what I needed and make it. And so we come to this scope.

It is built on the 10-50X60 FT chassis and optical arrangement. BUT it has an interesting deviation from the products currently offered as part of the SIII FT Line: it uses the MOA-H reticle. For those of us that do NOT click, the "normal" Sightron reticle is not too useful. Only the center dot illuminates and combining windage and elevation hold-offs requires that you guess and hold into mid air; and when contesting a target during real bad weather, or a very dark day, or when it gets late because the Match has dragged on, having just the center dot illuminate is not really useful.
BUT, the MOA-H reticle DOES have a lot of other aimpoints, and it DOES iluminate completely.
Again, I understand that this is not for everyone. But for those shooters that do not click, those shooters that NEED a 12X mark, and those shooters that want UNEXCELLED ranging just by using the parallax sidewheel, this is the scope for them. 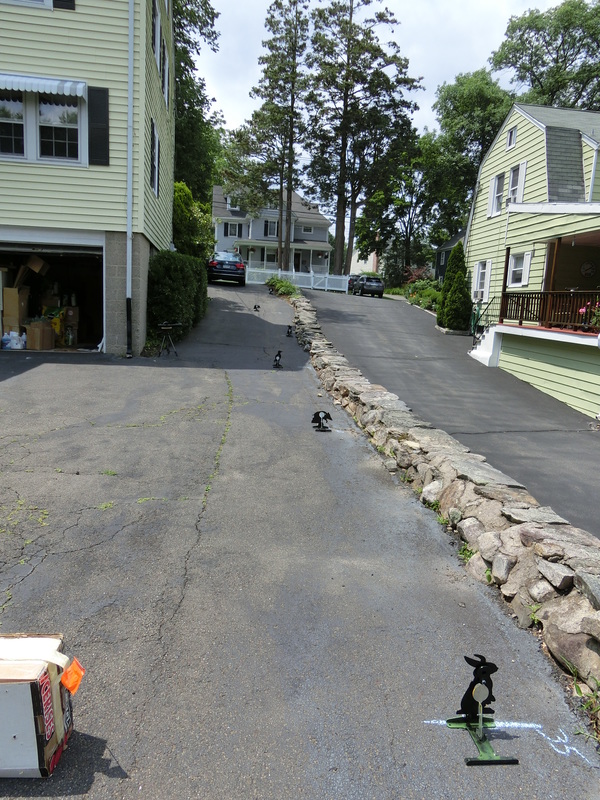 This is ½ of the setup, the "short" targets. Observation point will be at the top of the driveway, to the right of the car. 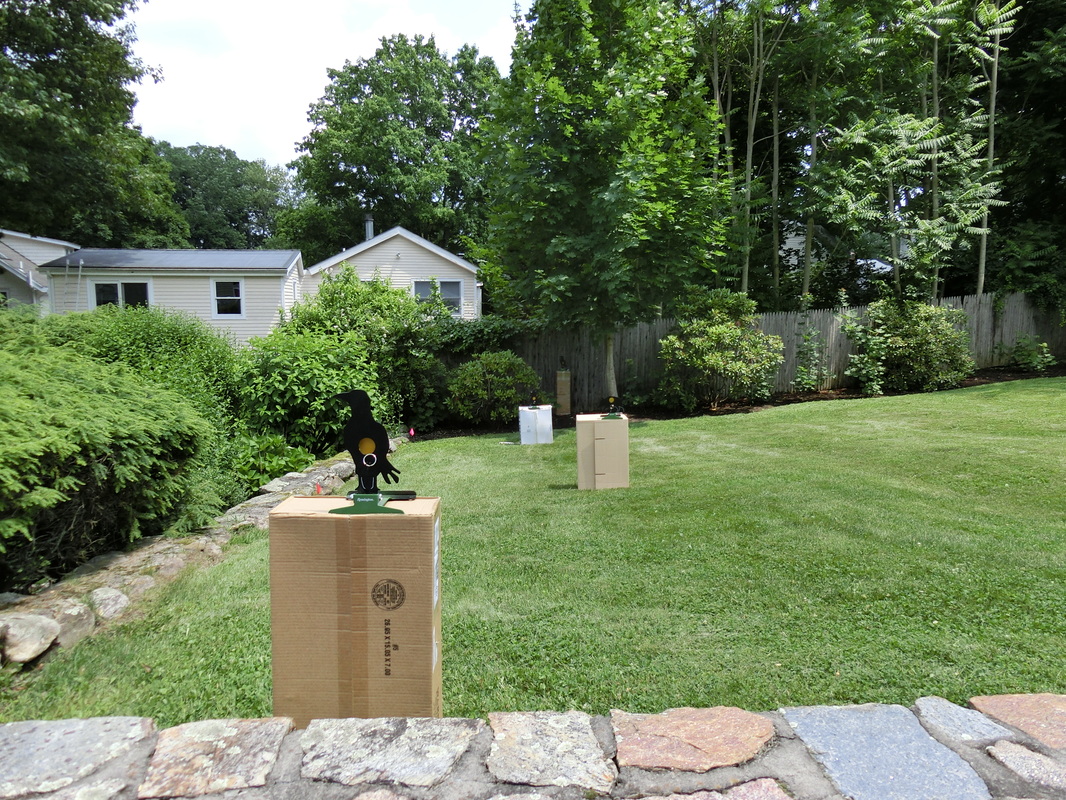 These are the "Long" targets. 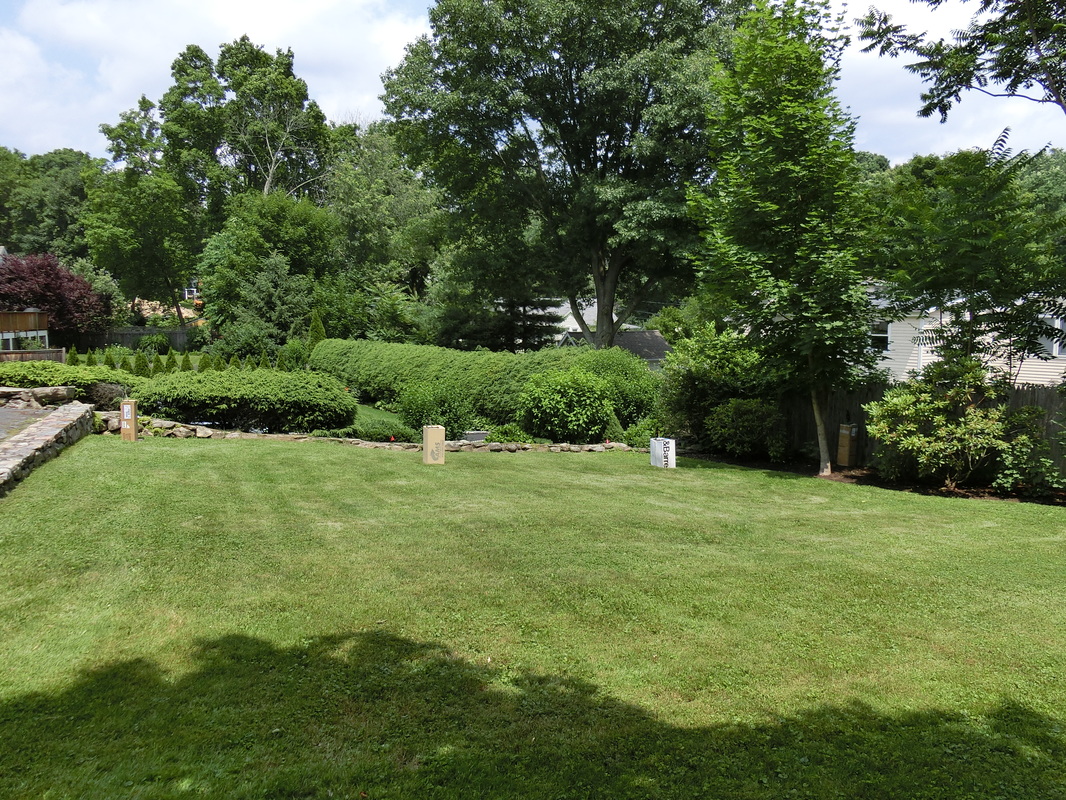 In case someone thinks that they are not 5 yards apart each, here is a sideview. Well, the last one (extreme right) is 3" short of the 5 yards, LOL! 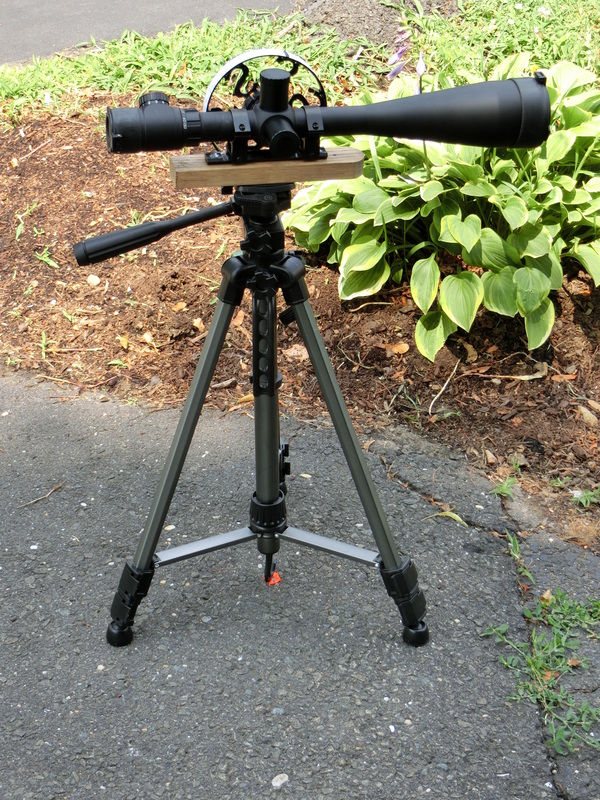 This is the test scope setup. I had to dismount the scope from my rifle to do this test, but so be it. 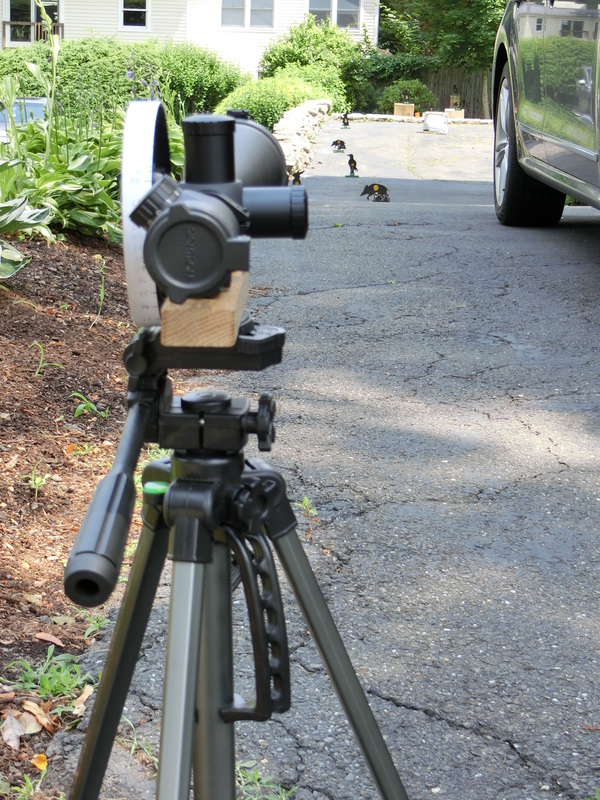 And here is the whole setup as seen from the observation point. The nearest target is not visible, and you will note that I setup a boar, a bunny and a crow and then repeated the sequence. 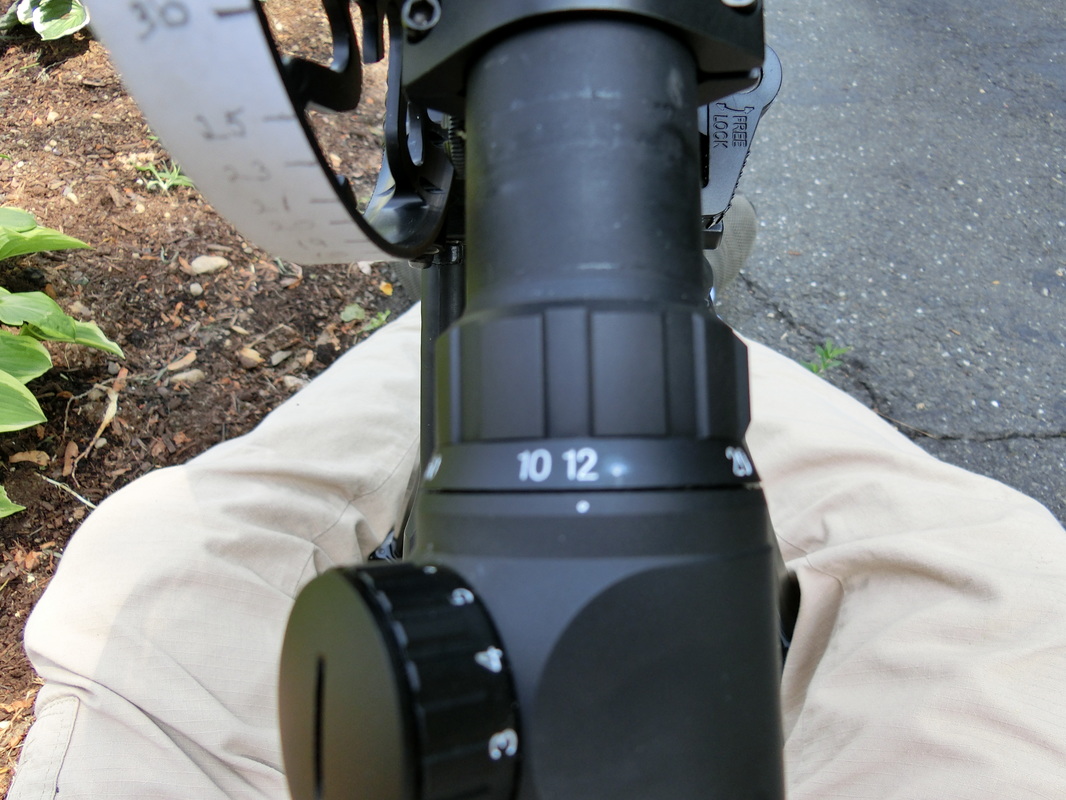 Scope was set at what ANY MD would accept as being the 12X mark. The small white dot next to it was placed by me and it is the magnication at which the scope is TRUE mRads. Not important for most people, but important to me. There is ANOTHER dot at the point where the scope's hash marks are TRUE ½ mRads, but that mark is at the 29X point. 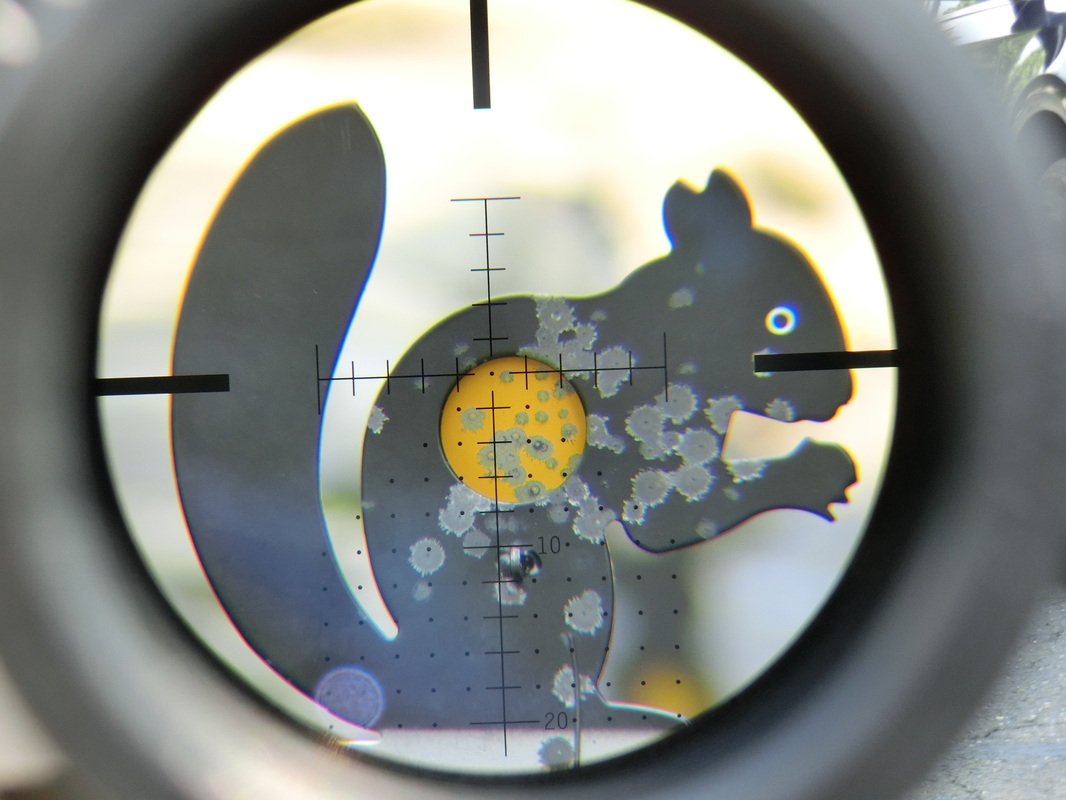 This is a 9 yds. squirrel. Do note how most of the sight picture is in focus, BUT the point of the return string attachment point. . . not quite so. This is how shallow is the DoF (Depth of Field). Of course at longer ranges that DoF grows, but we'll get to that later. 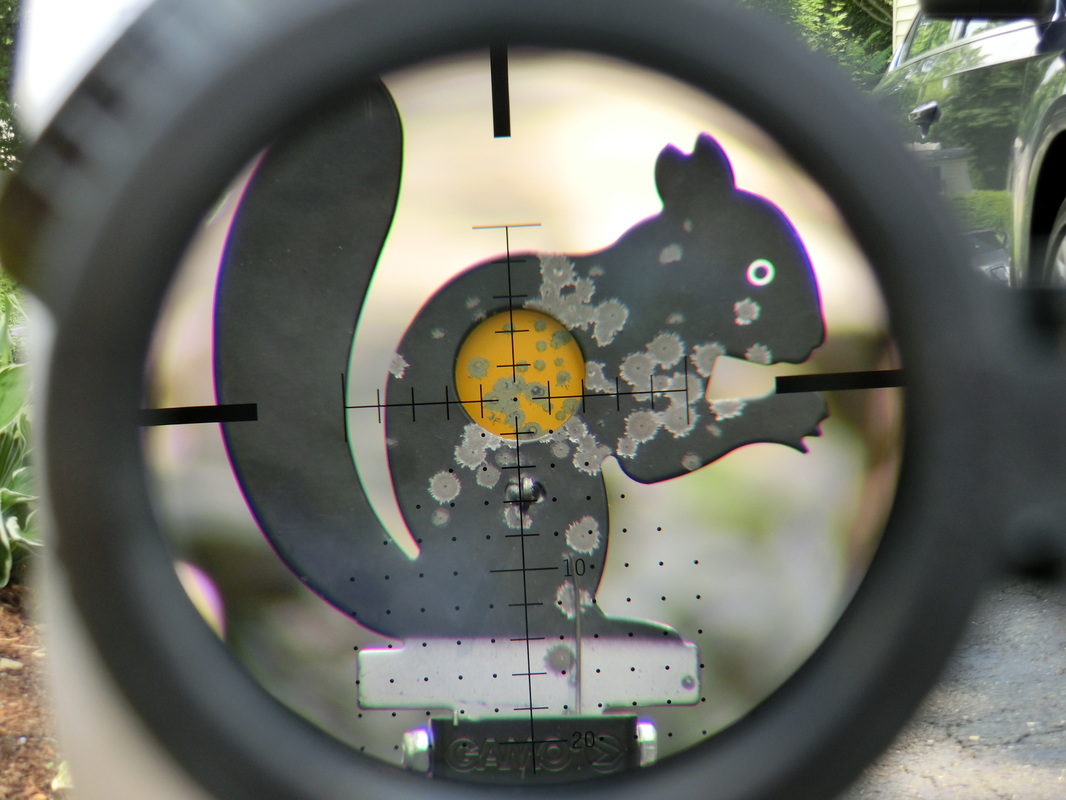 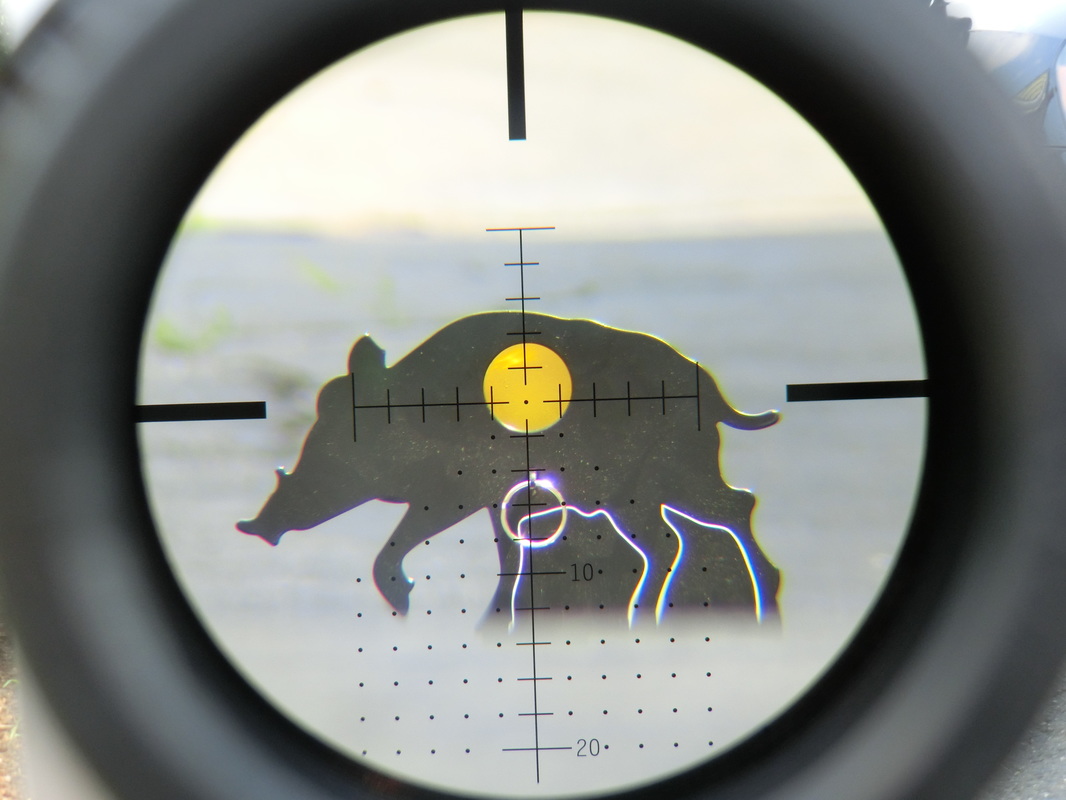 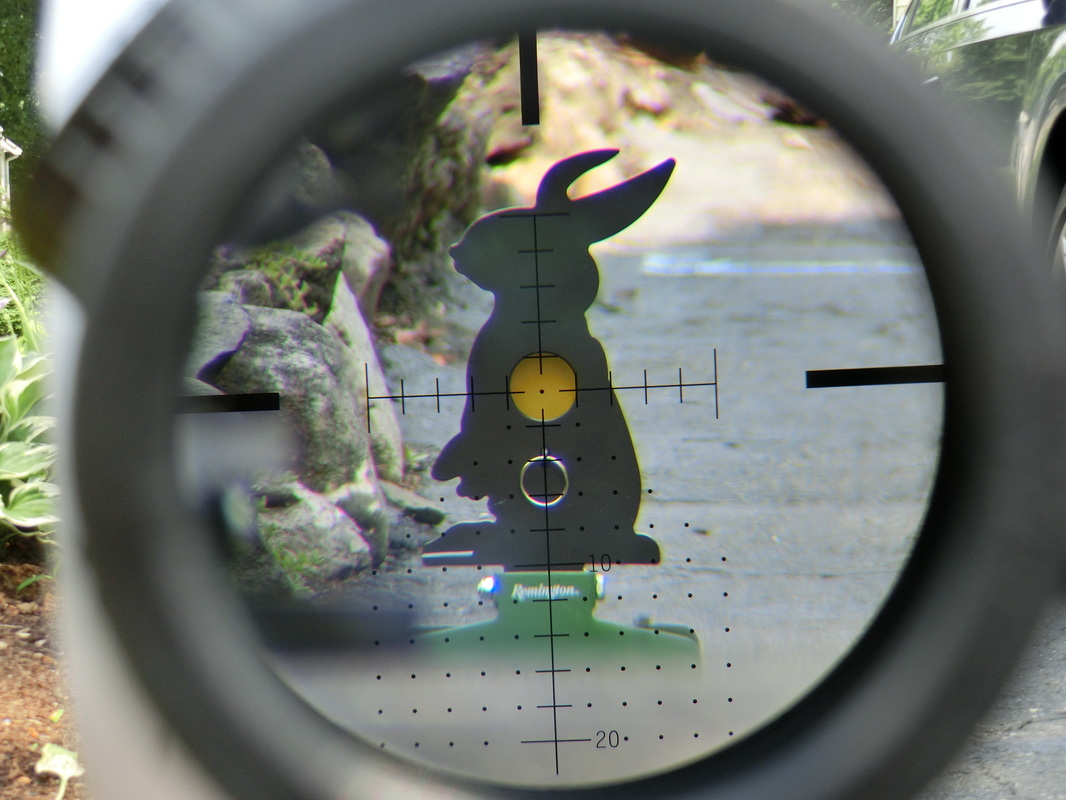 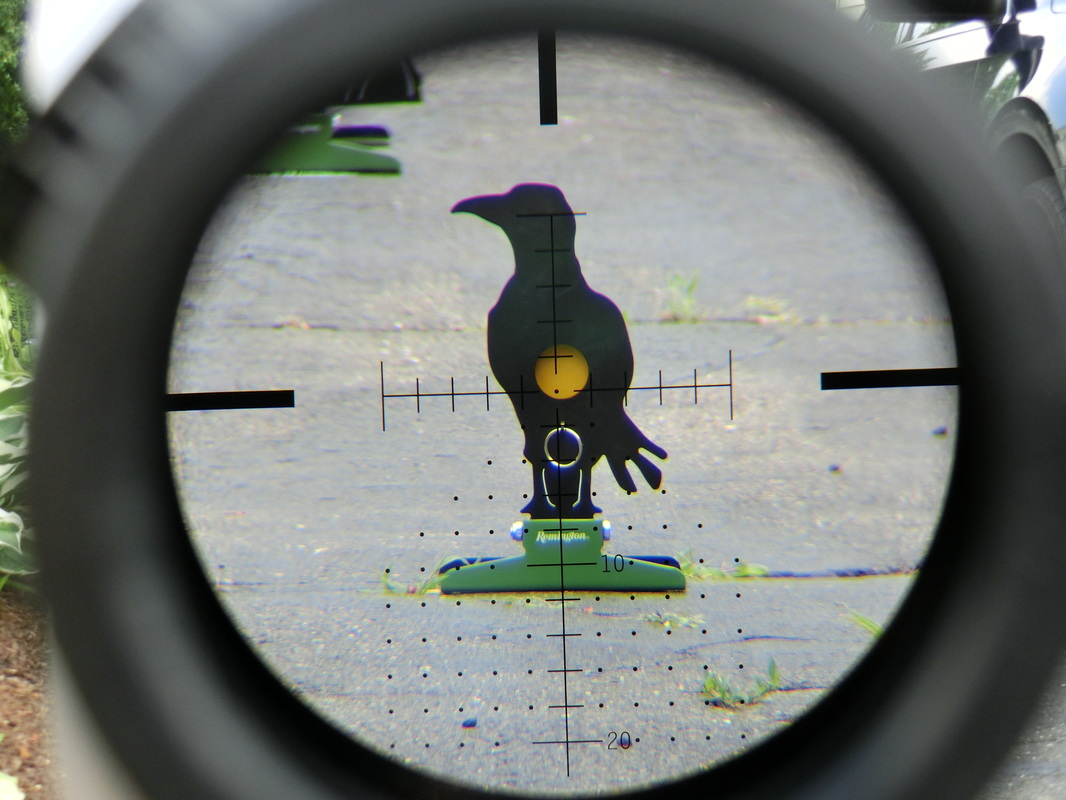 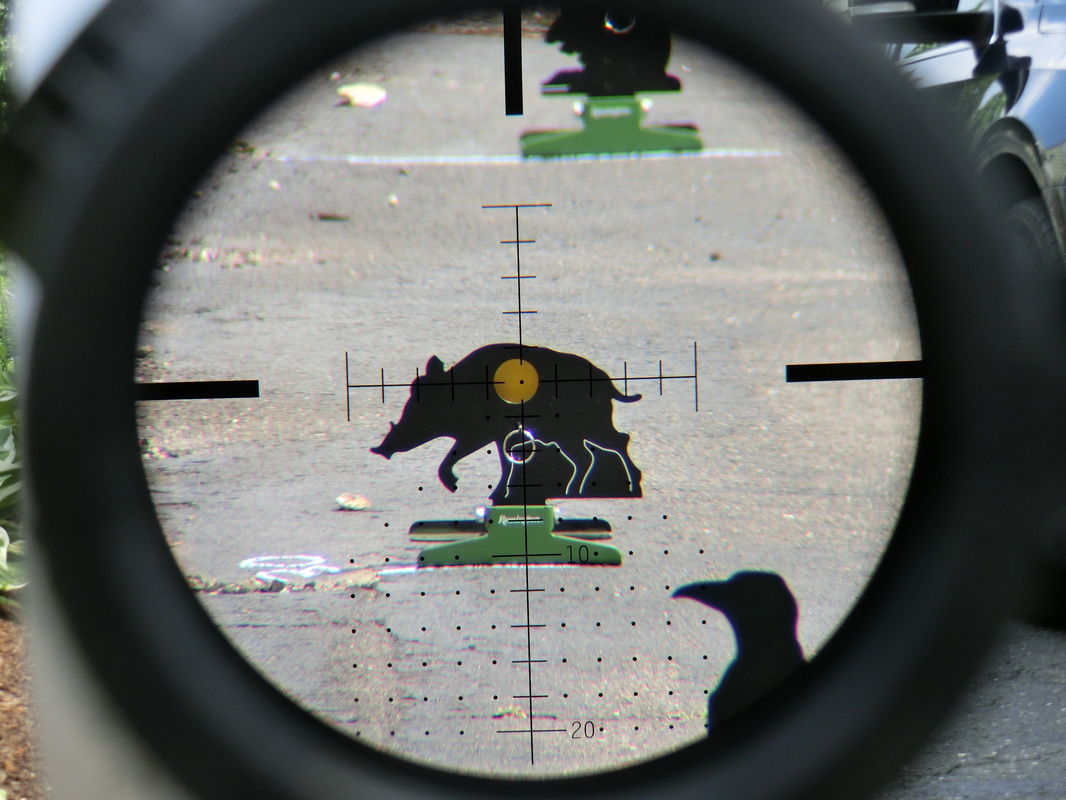 The 30 yards Boar. Note the yardage marking on the pavement to the left. And do note that neither the previous target nor the subsequent target are anywhere near focus. 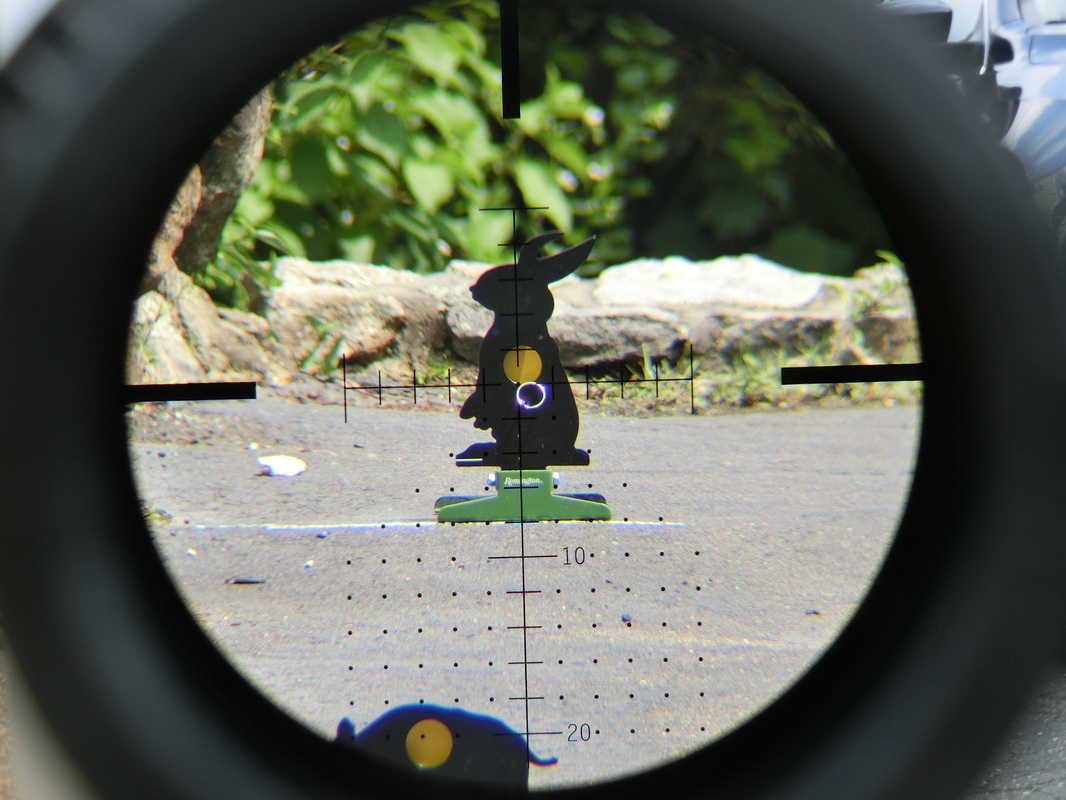 The 35 yards bunny. The stone wall in the rear is only 3 yards away and still, it is clearly NOT in focus. USUALLY, this is where MOST scopes stop being REALLY useful at 12X. 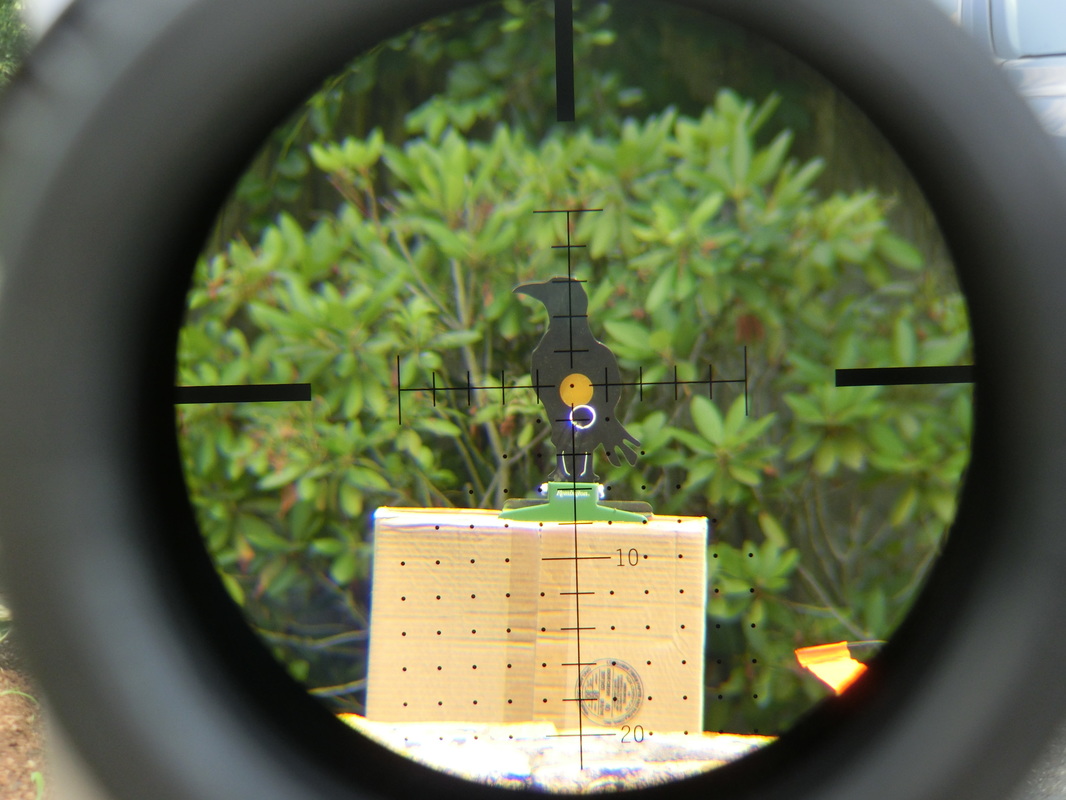 The 40 yards Crow. The stone wall in front, only 2 yards away is not in focus. 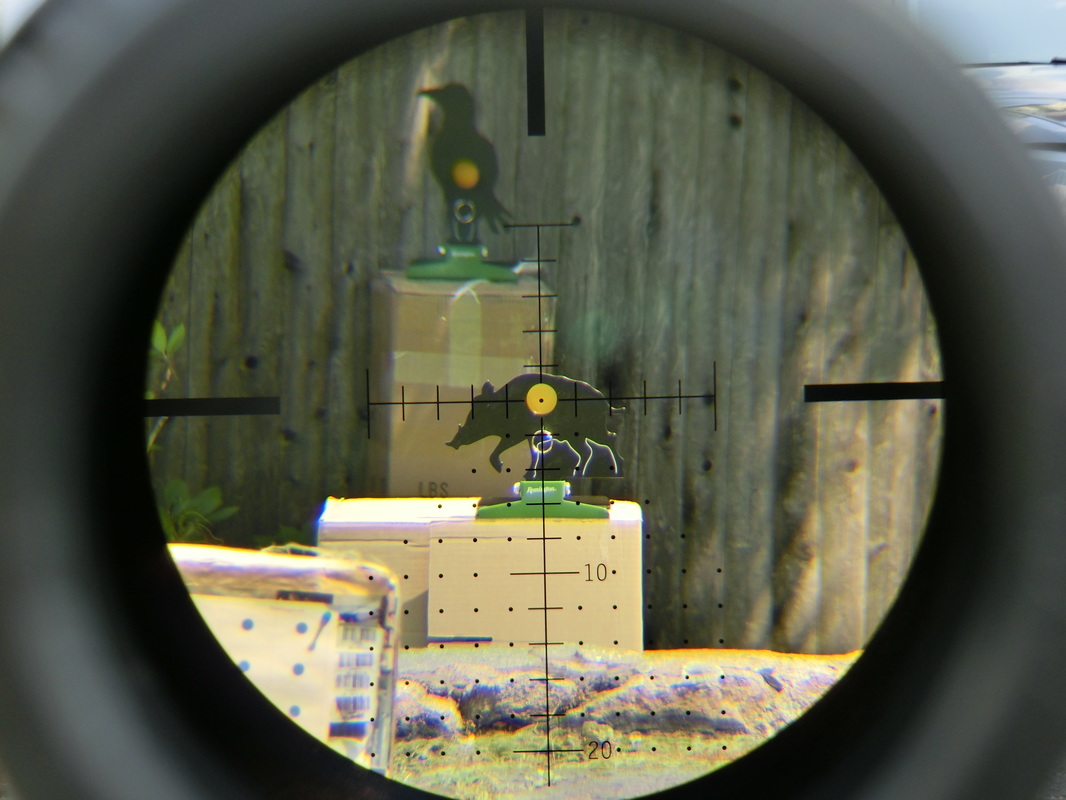 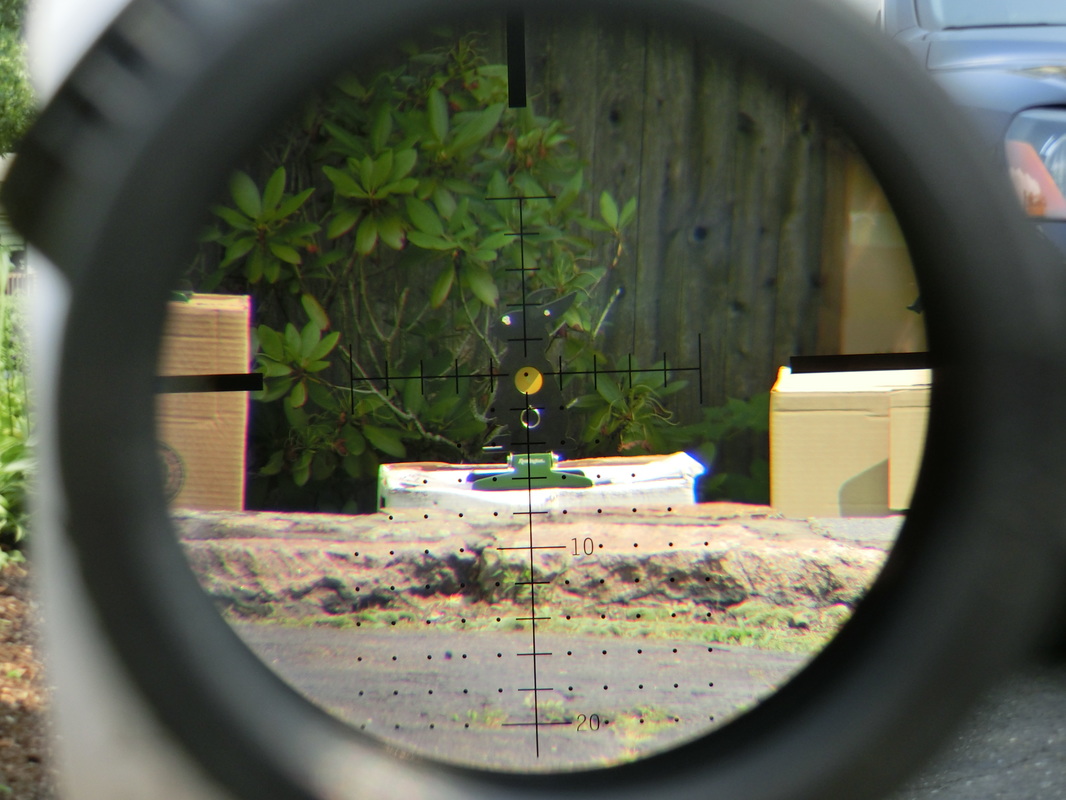 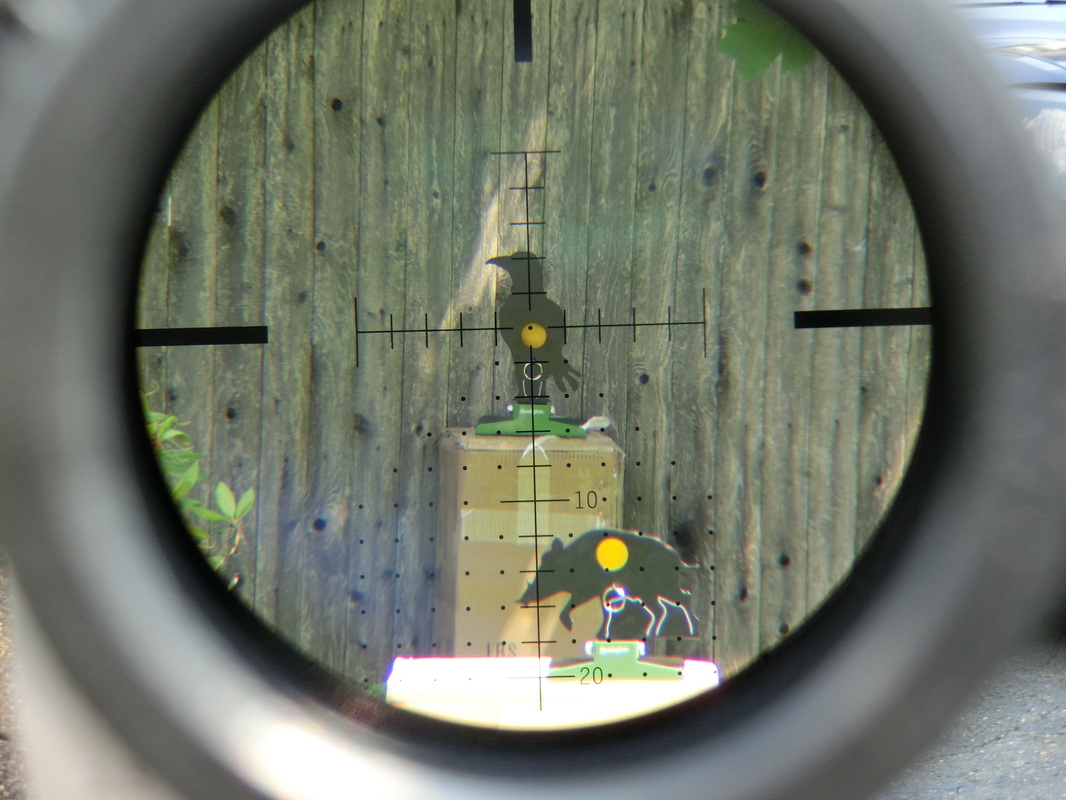 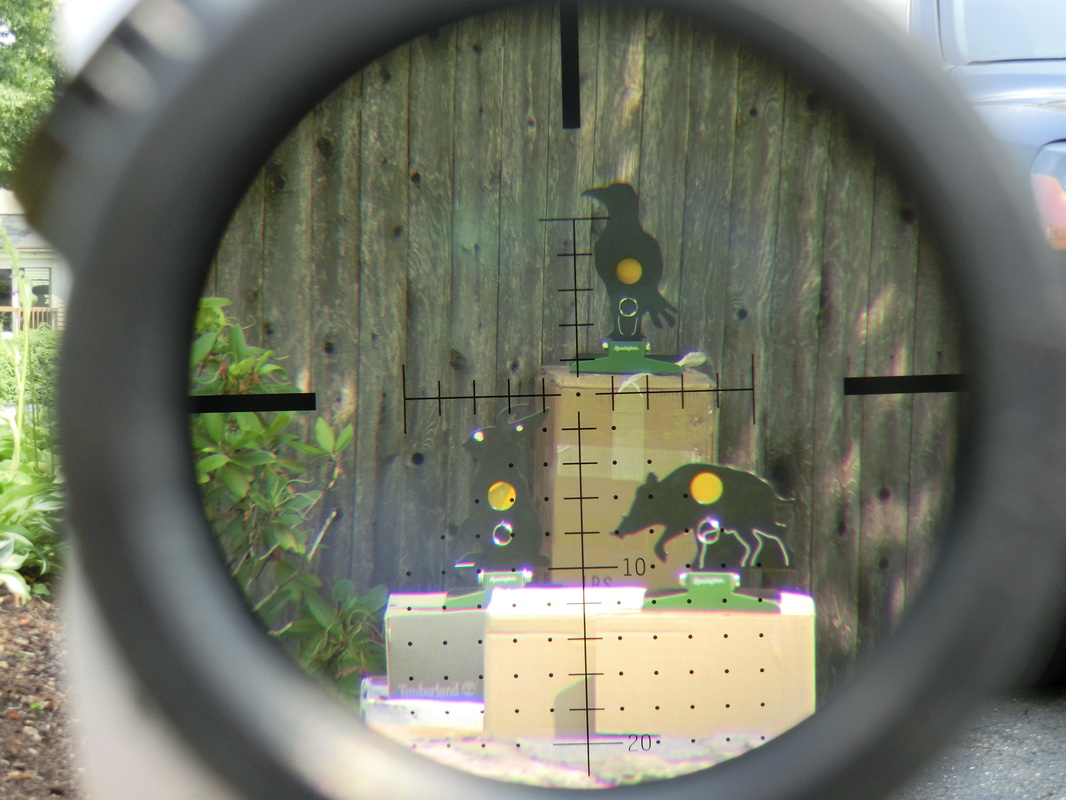 Now, let's see three target simultaneously with the scope focused at the 55 yards mark. You can clearly see the Crow in focus (concentrate on the "Remington" lettering), but neither the 50 nor the 45 yards targets are in focus. 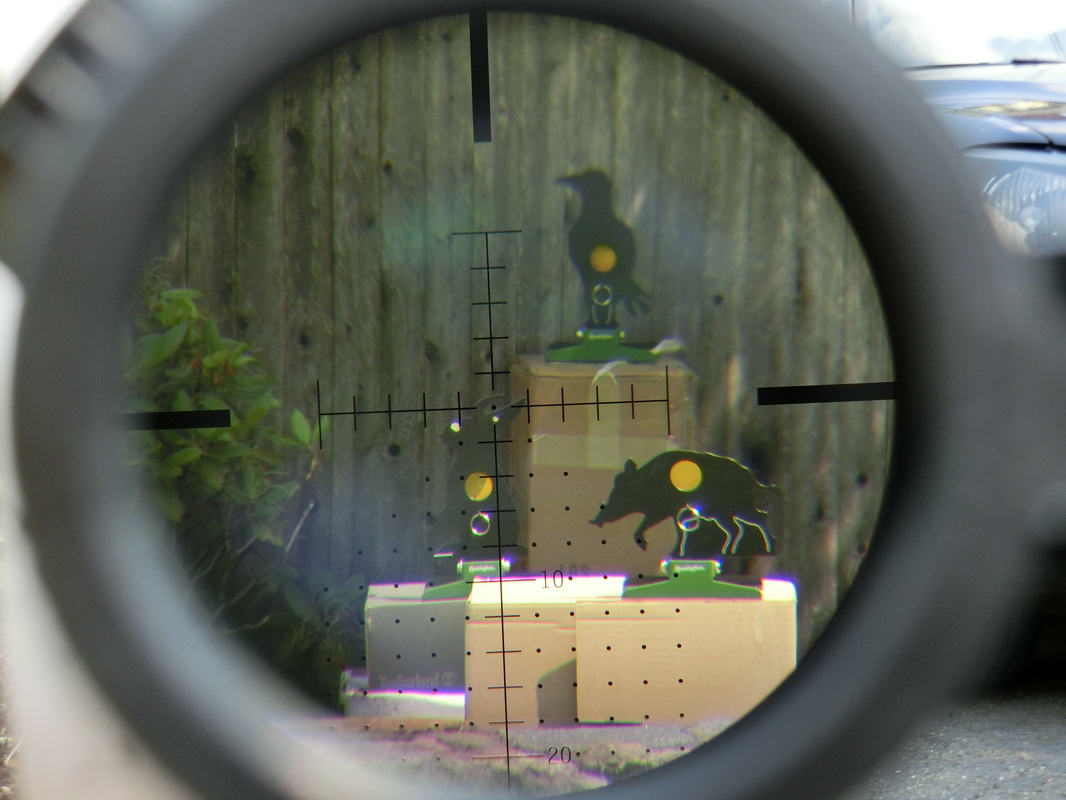 If we now focus on the 50 yards target (Bunny), neither the 55 nor the 45 yards targets are in REAL focus, again look at the lettering. 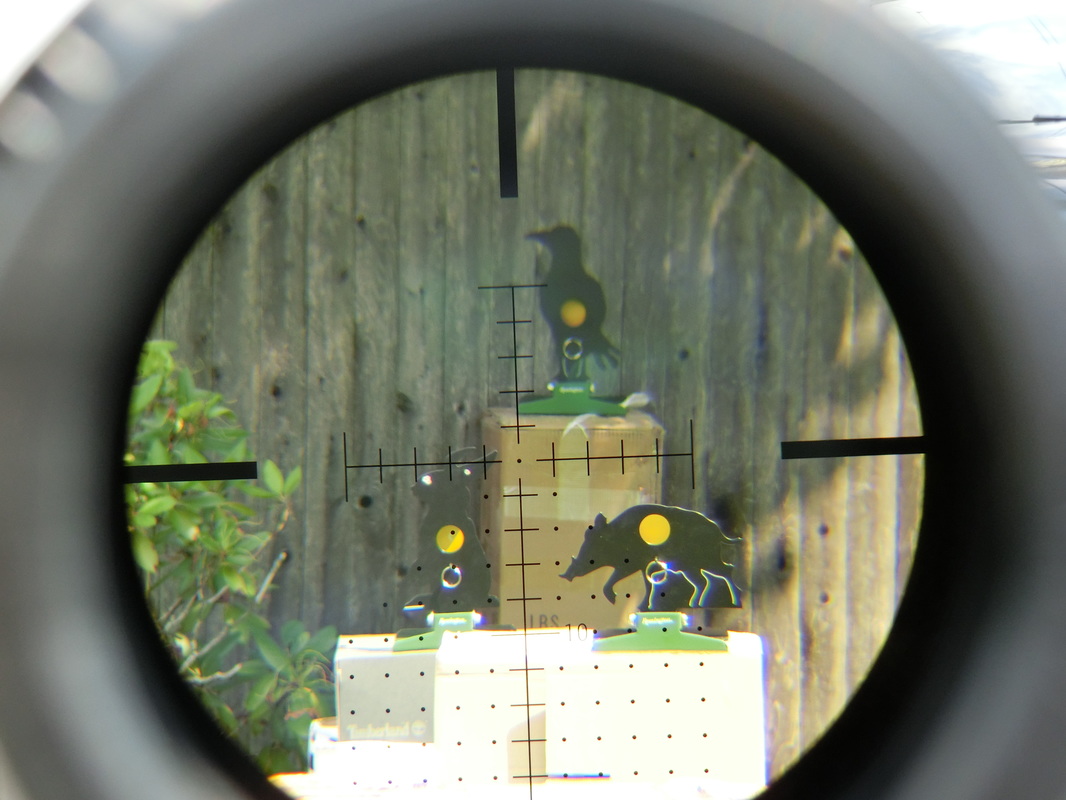 And if we now focus on the 45 yards target, neither the 50 nor the 55 yarders are in real focus. 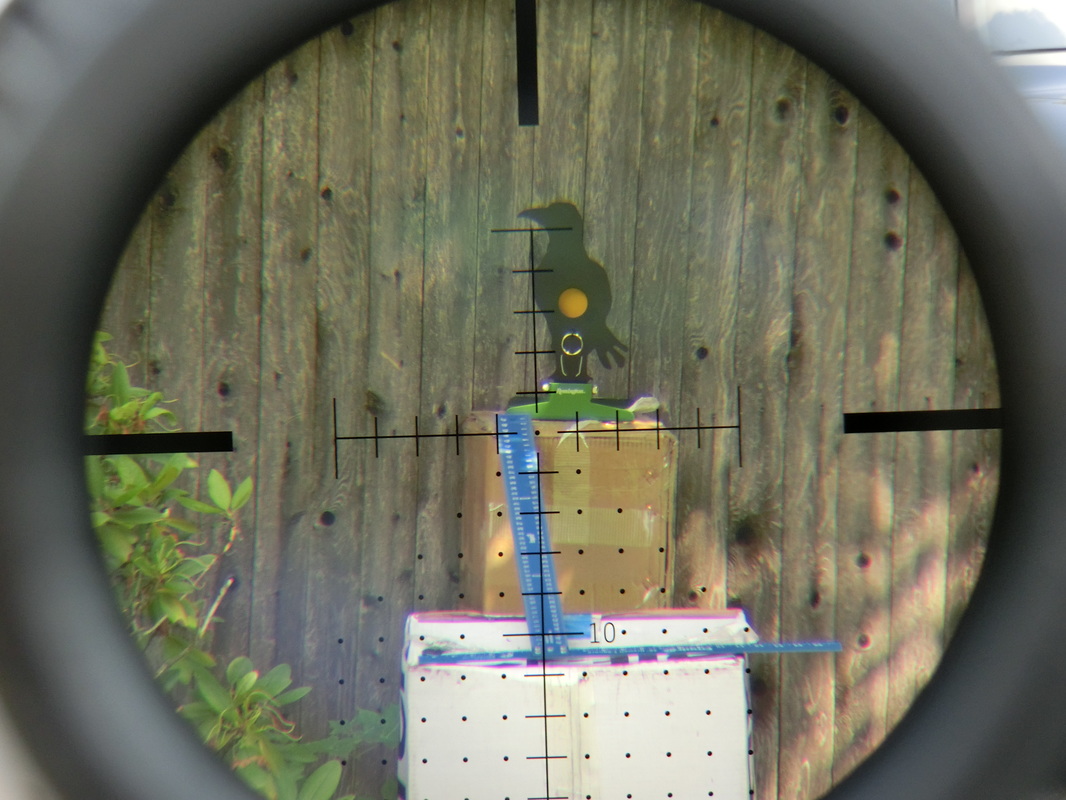 A way of measuring the DoF is to lay down a ruler at a known angle, and then calculate the LOS distance that is spanned between in-focus numbers and out-of-focus numbers. I laid down a construction ruler that spans 48" complete, the angle for the LOS is about 15º. The far end is in focus and the image goes OUT of Focus at around where the brand of the ruler is. This is around ½way of the whole ruler. DoF can be confidently estimated at around 1 yard (in reality about 2 feet, but not everyone will see the small details), being conservative. And, this is working at 12X and 55 yards range!
As you can see, Sightron has done an INCREDIBLE job at providing FT shooters with the best possible tool.
The reticle may be a little bit coarse, but I am a firm believer that "Done is better than perfect" and making it finer with more aimpoints, COULD render the reticle a bit "busy", even for me! LOL!

This scope will come with the Flip-Open scope caps and the large 5" sidewheel you see in the introductory photograph. It will NOT come with the scopecoat that is pretty useless for FT shooters (unless you want to cut it, and then it looses part of its protective nature). Battery, cleaning cloth and paperwork, plus one allen wrench will be included, an eye shield is optional, but I think that most FT shooters will find something closer to their heart's desires from other sources. 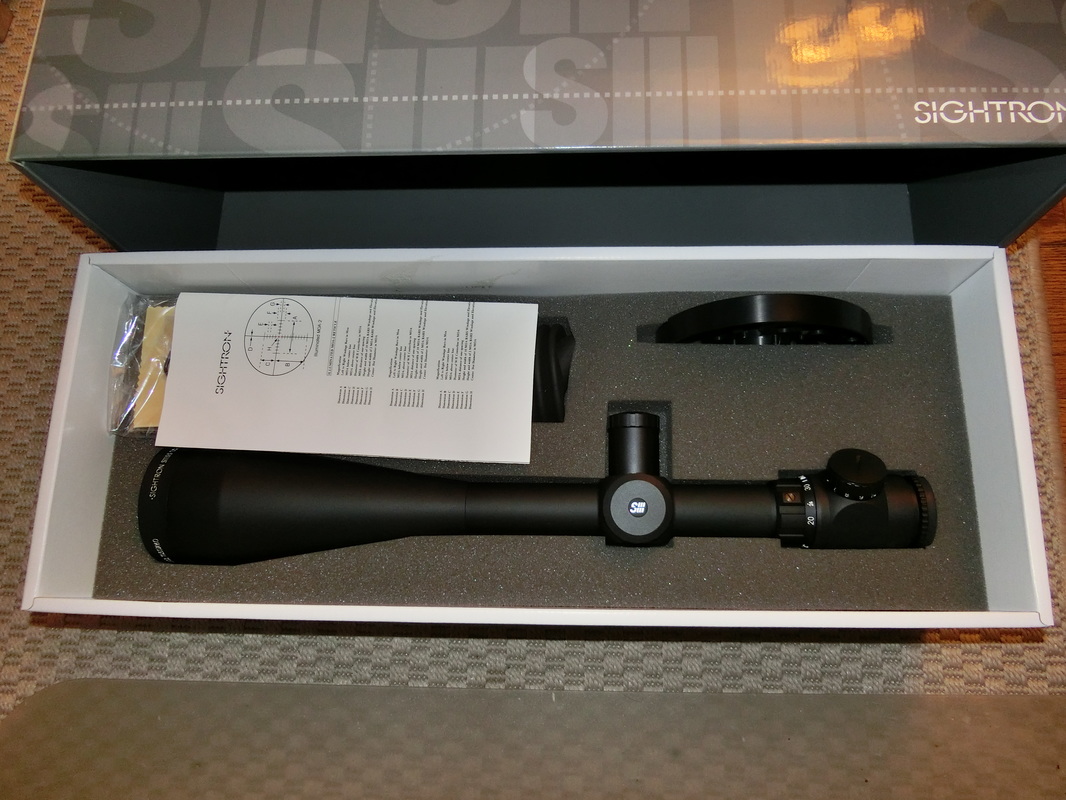 At the shooter's option, we can add to the circular Sightron OEM sidewheel, a lighter, 3D printed, Nautilus CCA sidewheel with an 8" equivalent diameter. 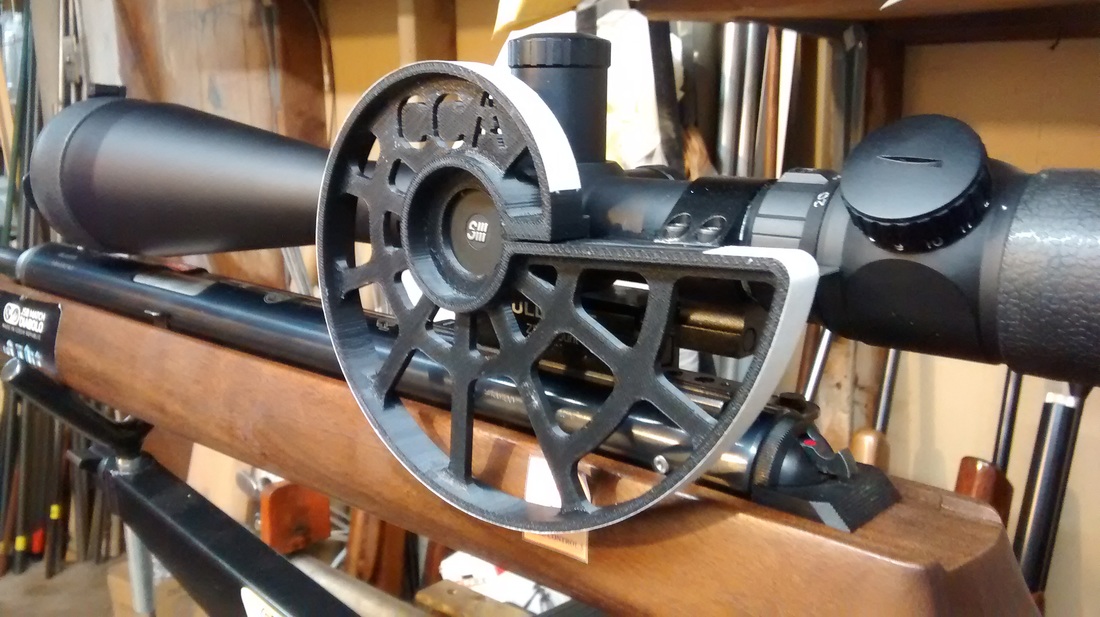 The large Nautilus sidewheel for the SIII is now in production and can be added to this scope for $100.00, while it does need a knife-edge pointer, the increased resolution afforded is quite worthwhile.